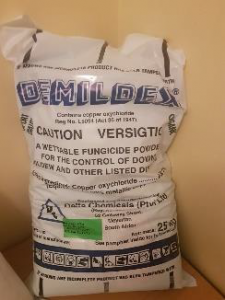 Not all copper fungicides are the same. Many brands are available, and tests have shown they vary remarkably in the quality, reliability, and consistency of the formulation. When choosing the best copper fungicide to protect your crop, the most important things to consider are:

Only High-Quality Ingredients Go Into Demildex

All copper fungicides are manufactured using scrap copper. Product sourced from copper scrap results in the presence of impurities, including heavy metals. The purity of the final product depends on the purity of scrap used. Demildex is produced using the highest quality copper scrap. Copper joiners (major contributors of heavy metal impurities such as lead) are removed. As a result, Demildex averages a very 73 ppm lead level, well below the international standard of 250 ppm.

All copper oxychloride and copper hydroxide products follow the same production process whereby copper chloride is an intermediary compound. The level of copper chloride in the final product is directly proportional to the reaction (manufacturing) time.

Why This Is Important!

Copper chloride is highly undesirable because of its phytotoxic effects on plants. Symptoms include burning of the leaves or blemishes on the fruit. Because of the extra-long oxygenation time with Demildex’s production process, this product has the minimal (0.05% to 0.09%) copper chloride levels. Other brands have tested copper chloride levels as high as 2%. The very low copper chloride content in Demildex is an essential consideration for all crops, especially the more sensitive crops such as tomatoes.

Table of theoretical values for several particles per gram and specific surface area:

*Calculation procedure assumes that all particles are perfectly spherical.

The Particle Size Of Demildex Is Very Small With:

Comparing Demildex With Some Other Commonly Used Copper Products:

Demildex Sticks To The Plant Better

For fungicides, the tenacity coefficient is a measure of the product’s ability to stick to the plant and hence gives an excellent guide to its resistance to weathering from rainfall or overhead irrigation.

The tenacity coefficient (and resistance to rainfall), increases with a decrease in particle size. Ultrafine Demildex sticks exceptionally well to the plant.

The fine texture and quality of Demildex mean this product can be used at lower rates than the average copper oxychloride. Demildex label rates are similar to the hydroxide products making Demildex very attractive on a comparative basis.

The Facts On Wettable Powders Versus Soluble Liquid Formulations

The following information was supplied by Professor J.M. Kotzê from the University of Pretoria, South Africa. Professor Kotzê is an international authority on copper compounds used as fungicides. These comments help to clear the debate as to the fungicidal effectiveness of soluble copper products.

“The fungicidal/bacterial properties of copper oxychloride are based on copper (the active ingredient), which is slowly dissolved in moisture (rain or irrigation) on the plant leaf in the presence of weak organic acids. As plant infections take place during storms, small amounts of copper are released on the plant surface to kill or inhibit the germination of micro-organisms.

Demildex is a protectant fungicide/bactericide which prevents infection on plants. Its mode of action is by interfering with the enzyme system of spores and mycelium, a process that is usually irreversible. It forms a chemical barrier against fungal attack.

Copper never controls plant diseases when absorbed into the plant. Soluble liquid copper products have very high and quick absorption by the plant.”

Demildex forms a chemical barrier which protects the plant tissue from fungal attack. It does not have any systemic fungicidal value.

If you’re not sure which product is right for you, feel free to get in touch for a free consultation.